First-generation of Pen is a battery pen, first launched on H420. Although it’s easy to replace the battery and a single 3A battery supports 800 hours of continuous usage, the changing process was quite annoying.

The position of the battery breaks the weight distribution of the pen and causes poor user experience.

In 2012.3.30, Huion introduced PenTech 1.1, which upgraded the battery pen to rechargeable pen. The rechargeable is first launched on Model K58. No more battery replacement and a full charge can support 40 hours of usage time.

No more annoying battery changing process, but you still need to charge the battery. The battery still located in the pen, so the heavyweight of the pen will cause fatigue while using.

Since you cannot replace the battery, long-period placing may cause the battery to break down.

Huion introduced the PenTech 2.0 battery-free pen in 2017.08.30 and equipped on H640P. The purpose of the new battery-free pen uses Electromagnetic resonance technology and finally gets rid of the constraint of battery.

But the battery-free pen still using the same internal structure of the rechargeable pen, including senor and pen nib shape, which results in longer idling distance and cursor offset on edges of the pen display.

To achieve a better user experience, Huion first brought PenTech 3.0 with the pen display KAMVAS 13. The new generation pen uses new model of senor. Senor position is lower from 6mm to 3.5mm. Lower sensor position means quicker respond and reduces the idling distance from 0.8mm to 0.3mm. The pen nib shape is also optimized for better accuracy. With the new PenTech 3.0, the pen now follows every pen movement tightly. The new generation pen can be used with felt pen nibs. The felt pen nib increases the friction when drawing and brings you a pen-on-paper drawing experience.

From an old-fashioned battery pen to a high-tech battery-free pen, it contains the idea of pursue the optimal user experiences and the effort of technical team. 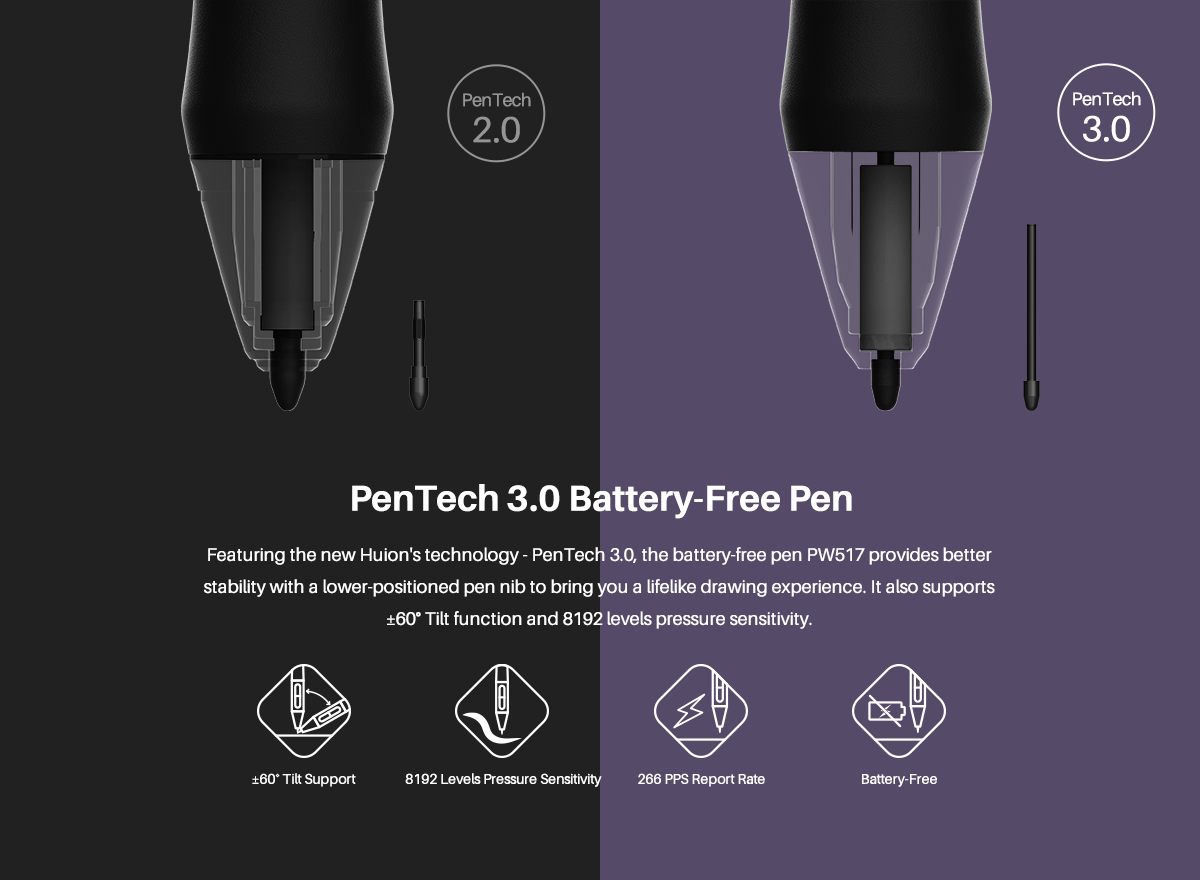